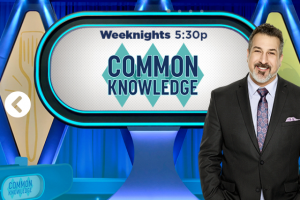 NO PURCHASE NECESSARY TO ENTER OR WIN. A PURCHASE WILL NOT IMPROVE YOUR CHANCE OF WINNING.

Introduction: The Game Show Network Common Knowledge Weekly Sweepstakes (the “Weekly Sweepstakes”) begins on or about Monday, March 18, 2019 at 12:01 a.m. Pacific Time (“PT”) and ends on Sunday, April 14, 2019 at 11:59 p.m. PT (the “Promotion Period”). The Promotion consists of a series of weekly independent drawings. For each weekly Sweepstakes offered throughout the Promotion Period, a random drawing (each, a “Weekly Drawing”) will be conducted to select one (1) winner of a prize from among all eligible entries received, as set forth more fully below. Game Show Network, LLC (“Sponsor”), reserves the right, in its sole discretion, to end the Promotion Period before April 14, 2019. Entry in the Promotion does not constitute entry into any other promotion, contest or sweepstakes. By participating in the Promotion, each entrant unconditionally accepts and agrees to comply with and abide by these Official Rules and the decisions of Sponsor, located at 2150 Colorado Avenue, Suite 100, Santa Monica, California 90404, which shall be final and binding in all respects.

Eligibility: Only legal residents of the United States who are eighteen (18) years of age or older at the time of entry are eligible to enter. Those persons who are involved with the development, production or distribution of the Promotion, along with the officers, directors and employees of Sponsor, Sony Pictures Entertainment Inc., AT&T, DIRECTV and each of their respective parents, subsidiaries, divisions, and affiliates, (all such individuals and entities referred to collectively as the “Promotion Entities”), and the immediate family members of and those living in the same household (whether related or not) as any of the individuals in the preceding categories, and any person whose access to www.GSN.com, www.GSNTV.com and/or www.WorldWinner.com has been terminated or suspended, are not eligible to enter the Promotion or win a prize. This Promotion is void where prohibited.