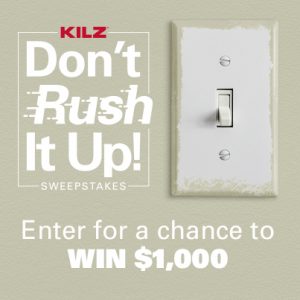 Masterchem Industries – Win a grand prize of a $1,000 Visa gift card OR 1 of 4 minor prizes

NO PURCHASE NECESSARY. A PURCHASE WILL NOT INCREASE ODDS OF WINNING. VOID WHERE PROHIBITED.

2. ELIGIBILITY. The Promotion is open only to individuals who at the time of entry (a) are legal residents of and domiciled in the fifty (50) United States or the District of Columbia, and (b) are at least eighteen (18) years of age. The following individuals are not eligible to participate: (i) employees of Masterchem Industries LLC (“Sponsor”) or Masco Corporation, any of their subsidiaries or affiliate companies, or their advertising, marketing or promotional agencies; (ii) family members (spouse, parents, siblings, children and in-laws) of any individual referred to in clause (i); and (iii) persons living in the same household (whether or not related)
with any person referred to in clause (i) or (ii) above. This Promotion is subject to all federal, state, and local laws and regulations and is void (a) outside the fifty (50) United States and the District of Columbia, and (b) where prohibited by law.

A. Upload a Photo: During the Promotion Period, visit the Sponsor’s Promotion landing page at: http://spr.ly/6002E5yWC and follow all on-screen instructions, which include the option to upload a photo of your DIY rush up (“Photo”), include a brief photo caption, and complete and submit the registration form including but not limited to first name, last name, and email. Upon successful submission of the registration information and Photo upload, eligible entrants will receive one (1) entry into the Promotion (an “Entry”). There is no cost to enter. All Entries must be received by 11:59:59 P.M. PT on May 23, 2019 to be eligible. Entries generated by script, macro, or other automated or mechanical means or means which subvert the Entry process will be void. All entries become the property of Sponsor and will not be returned.
By submitting a Photo, entrant grants Sponsor and its agents an unlimited, worldwide, irrevocable, perpetual license and right, but not obligation, to publish, reproduce, exhibit, use, publicly display, distribute, edit, crop or otherwise exploit and create derivative works of the Photo (as well as any name or likeness embodied therein) in any way, in any and all media, now known or hereafter devised, without limitation, and without further consideration or approvals. Each entrant waives any intellectual property rights, publicity/privacy rights or other legal or moral rights relating to such use. BY SUBMITTING A PHOTO, ENTRANT AGREES THAT THE PHOTO, ALONG WITH HIS/HER FIRST NAME, AND LAST INITIAL, MAY BE POSTED ON THE WEBSITE, OTHER SOCIAL MEDIA PLATFORMS, INCLUDING BUT NOT LIMITED TO OTHER PAGES ON FACEBOOK, TWITTER, ETC., THE INTERNET, TELEVISION, RADIO, AND PRINT AT SPONSOR’S SOLE DISCRETION, AND ENTRANTS ACKNOWLEDGE THAT THEIR ENTRIES MAY BE REPOSTED BY THE PUBLIC OR OPEN TO PUBLIC COMMENTARY, FOR WHICH SPONSOR AND THE PROMOTION ENTITIES SHALL NOT BE LIABLE.
PHOTO GUIDELINES AND REQUIREMENTS: Each Photo:
 Must be in one of the following formats: .JPEG, .JPG, .GIF, or .PNG;
 Must not exceed 5 MB;
 Must not contain material that violates or infringes another’s rights, including, but not limited
to, privacy, publicity or intellectual property rights, including copyright infringement, or legal
or moral rights of any third party, living or deceased;
 Must not disparage Sponsor or any other person or party affiliated with the promotion and administration of this Promotion;
 Must not include any personally identifiable information;
 Must be the original work of the entrant and must not contain images or artwork, music,
quotes, parodies or other materials not created by entrant;
 Must not feature brand names, logos or trademarks other than Sponsor’s trademarks in any
other element of the entry or image, which Sponsor has granted, as respect to the Sponsor’s
trademarks, entrant a limited license to use for purposes of this Promotion;
 Must not have been submitted previously in a promotion or contest of any kind and has not
been exhibited or distributed currently or previously in any media;
 Must not contain, facilitate, reference, or use material that is fraudulent, inappropriate,
indecent, lewd, pornographic, obscene, hateful, tortious, defamatory, slanderous or libelous;
 Must not contain, facilitate, reference or use material that contains prohibited content which
shall include, but is not limited to content that promotes, suggests, or encourages:
i. gambling, including without limitation, any content related to online casinos, sports books,
bingo or poker;
ii. the use of firearms/weapons/ammunition, any illegal drugs, prostitution, pornography,
nudity, profanity or other adult content, violence, or the use of alcohol or tobacco products; iii. the taking up of arms against any person, government or entity or otherwise challenge or
seek to overthrow any government;
 Must not contain any viruses, spyware, malware, or other malicious components that are
designed to harm the functionality of a computer in any way;
 Must not contain, facilitate, reference, or use material that promotes bigotry, racism, hatred
or harm against any group or individual or promotes discrimination based on race, gender, ethnicity, religion, nationality, disability, sexual orientation, political orientation, citizenship, ancestry, marital status, or age; and
 Must not contain material that is unlawful, in violation of or contrary to the laws or regulations in any jurisdiction where the Photo was created.
Entrant must have approval from any persons appearing in the Photo and be able to provide express written consent of every such person appearing in the Photo to Sponsor if requested.
NOTE: If any Photo fails to comply with any of these Photo Guidelines and Requirements or any other provisions of these Official Rules, Sponsor reserves the right to disqualify the Entrant and he/she will not be eligible to win.

8. GENERAL CONDITIONS. In the event of a dispute as to the identity of an online entrant, the authorized account holder of the email address used to enter, will be deemed to be the entrant, but only if such person meets all other eligibility criteria. “Authorized account holder” of an email address is defined as the natural person who is assigned to an email address by an internet access service provider, on-line service provider, or other organization (e.g., business, educational institution, etc.) that is responsible for assigning email addresses for the domain associated with the submitted email address.
Sponsor reserves the right at its sole discretion to disqualify any individual who tampers or attempts to tamper with the Entry process or the operation of this Promotion; violates the Official Rules; acts in an unsportsmanlike or disruptive manner; or acts with intent to annoy, abuse, threaten or harass any other person; or who Sponsor suspects has engaged in any of the foregoing. Sponsor reserves the right to cancel, terminate or modify this Promotion if it cannot be completed as planned for any reason, including without limitation for infection by computer virus, bugs, tampering, unauthorized intervention, technical failures, corruption of any sort or any other matter beyond Sponsor’s control. In such event, Sponsor will award the prizes from among all eligible entries received prior to cancellation.
9. RELEASE & LIMITATION OF LIABILITY. As a condition of entering this Promotion, each entrant agrees, and as a condition of being awarded a prize, each winner agrees, to the maximum extent permitted by law, to release, indemnify and hold harmless Sponsor and Masco Corporation, their respective subsidiaries or affiliate companies, their advertising, marketing or promotional agencies and each such company’s respective officers, employees, directors, representatives and agents and all others associated with the development and execution of this Promotion (individually and collectively, the “Released Parties”), from and against any and all liabilities, claims, actions, lawsuits, judgments, costs and expenses, damages of any kind whatsoever, injuries, or losses to persons or property arising from or relating to, in whole or in part, this Promotion, submitting an Entry or otherwise participating in any aspect of this Promotion, the receipt, ownership, possession, use or misuse of any prize awarded, or any actual or alleged breach by entrant of these Official Rules.
10. LIMITATION OF LIABILITY. Entrants acknowledge that the Released Parties have not made and are not in any manner responsible or liable for any warranty, representation or guarantee, express or implied, in fact or in law, relative to the prize, including, but not limited to, its quality or fitness for a particular purpose. The Released Parties are not responsible for: (a) lost, interrupted, inaccessible or unavailable networks, servers, satellites, Internet Service Providers, websites, or other connection, availability or accessibility problems arising in connection with or over the course of this Promotion; (b) failed, jumbled, scrambled, delayed, or misdirected computer, telephone or cable transmissions or hardware, software or technical malfunctions, failures or difficulties; (c) errors of any kind relating to or in connection with this Promotion, whether human, mechanical, clerical, electronic, or technical in nature, including, but not limited to, errors which may occur in connection with the administration of this Promotion, the processing of entries, the announcement or notification of any winner or prize or the cancellation of this Promotion; (d) damage to a user’s system occasioned by participation in this Promotion or downloading any information necessary to participate in this Promotion; (e) incomplete, illegible, misdirected, damaged or lost entries; or (f) failed, incorrect, inaccurate, incomplete, garbled or delayed electronic communications, whether caused by the sender, by any of the equipment or programming associated with or utilized in this Promotion. If the Kilz Website goes down for any reason or if Sponsor is unable to accept entries, Released Parties are not responsible, but Sponsor will make a good faith effort to remedy the problem as quickly as possible or Sponsor may terminate this Promotion. By entering this Promotion, you waive (to the maximum extent
permitted by law) the right to claim any punitive, consequential, incidental, special, exemplary, or indirect damages of any kind and any and all rights to have damages multiplied or otherwise increased.
11. DISPUTE RESOLUTION. If there is any conflict between any promotional material and these Official Rules, the provisions of these Official rules shall prevail. The resolution of any dispute shall be within Sponsor’s sole discretion. As a condition of entering this Promotion, except as prohibited by law, you agree that: (a) all causes of action arising out of or connected with this Promotion, or any prize awarded, shall be resolved individually, without resort to any form of class action; and (b) any and all claims, judgments, and awards shall be limited to actual out-of-pocket costs incurred, but in no event attorneys’ fees or court costs. All issues and questions concerning the construction, validity, interpretation and enforceability of these
Official Rules, your rights and obligations, or the rights and obligations of Sponsor in connection with this Promotion, shall be governed by, and construed in accordance with, the laws of the State of New York, without giving effect to any choice of law or conflict of law rules (whether of the State of New York or any other jurisdiction), which would cause the application of the laws of any jurisdiction other than the State of New York.
12. PRIVACY POLICY. To see how Sponsor may use personal information obtained in connection with this Promotion, see Sponsor’s Privacy Policy at http://www.kilz.com/privacy-policy.
13. WINNERS’ LIST. For the names of the winners, available after June 20, 2019, visit the Promotion landing page at http://spr.ly/6002E5yWC.
14. SPONSOR. The Sponsor of this Promotion is Masterchem Industries LLC, 1801 E. St. Andrew Place, Santa Ana, CA 92705.
©2019 Masterchem Industries LLC. All rights reserved.

Hard Rock Cafe – Win a grand prize of a trip for 2 to Hollywood for a Live Like JLO Experience valued at up to $100,000 OR 1 of 165 minor prizes
Expired
Comment
Top