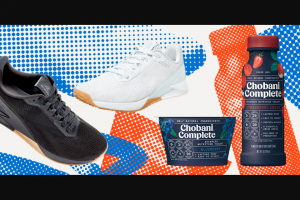 NO PURCHASE NECESSARY TO ENTER OR WIN.  A PURCHASE DOES NOT INCREASE YOUR CHANCE OF WINNING. VOID WHERE PROHIBITED.  BY ENTERING THE SWEEPSTAKES, YOU AGREE TO THESE OFFICIAL RULES, WHICH ARE A CONTRACT, SO READ THEM CAREFULLY BEFORE ENTERING. WITHOUT LIMITATION, THIS CONTRACT INCLUDES INDEMNITIES TO THE RELEASED PARTIES FROM YOU AND A LIMITATION OF YOUR RIGHTS AND REMEDIES.

ELIGIBILITY:  Open only to legal residents of the 50 United States and the District of Columbia who are 18 years of age or older at time of entry and time of awarding the prize.  If an individual is a resident of a jurisdiction that deems him/her to be minor, then he/she must obtain parental/legal guardian consent prior to entering and/or prior to submitting any personally identifiable information.

Officers, directors, and employees of Chobani, LLC, Reebok International Ltd. and ViralSweep, LLC; members of their immediate families (spouses and/or parents, children, and siblings, and their spouses); and/or persons living in the same households as such persons (whether or not related thereto) are ineligible to enter these Sweepstakes.  All federal, state and local laws and regulations apply.  Void where prohibited by law.
If you use your wireless mobile device to enter, standard message and data rates may apply. Please consult your wireless-service provider regarding its pricing plans prior to entering via your wireless mobile device. Sponsor (defined below) is not responsible for any message or data rate charges which may apply. A wireless mobile device is not required to enter the Sweepstakes.

PARTIES:  The Sweepstakes is administered by Chobani (“Administrator” or “Sponsor”), co-sponsored by Reebok with management support from ViralSweep.

PRIZE: One (1) Grand Prize winner and three (3) runners-up will be randomly selected and they will receive the following.

Grand Prize:
• Reebok Resistance Tube – Light (Grey)
• Reebok Resistance Tube – Medium (Red)
• Reebok Resistance Tube – Heavy (Black)
• Reebok Strength Series Weight Vest – 12LB
• Reebok Fitness Mat – Mesh
• Reebok Ab Wedge Mat
• Reebok Combat Uppercut Bag
• Reebok Retail Boxing Gloves – 10oz
• Reebok Core Board
• SL8.0 Elliptical
• Reebok Deck Bench
• $1000 Reebok Gift Card
• 100 coupons for free single-serve Chobani® Complete cups or drinks
• Pair of Reebok Nano X1 Sneakers
• Mini-fridge to be filled with Chobani® cups and drinks
Appx Retail Value of Prize: $4,500
Three (3) Runners-Up Will Each Receive:
• Reebok Nano X1 Sneakers
• 25 coupons for a free single-serve Chobani® Complete cups or drinks
Appx Retail Value of Prize:$150 for each prize / $450 in total for the three runner-up prizes
Prizes are awarded “as is” with no warranty or guarantee, either express or implied by Sponsor. The prize is not transferrable, assignable or redeemable for cash.  No prize substitutions may be made, except by the Sponsor, in its sole discretion, who reserves the right to substitute any prize with an alternative prize of equal or greater value.  The odds of winning depend on the number of eligible entries received.  The approximate retail price of the Grand Prize is prize is $4,500. The total approximate retail value of all prizes is $4,950.

HOW TO ENTER:  During the Promotion Period, visit chobani.com/homeworkoutsolved. and enter your name and email address.  Except where prohibited by law, entry of your email address grants to the Sponsor express permission to use the provided email address for further marketing or promotional purposes, without additional compensation.  Entrant information, including email addresses, are subject to the Sponsor’s privacy policy, see https://www.chobani.com/privacy-policy/.  Entrants’ personal details may be used by the Sponsor in accordance with its privacy policy. By entering the Sweepstakes, you consent to use of such information in accordance with such policy.

Winners will be notified via email address from which the entry was received.  Obtaining the Prize is subject to the entrant’s full compliance with these Official Rules and Entry Statement.  Except where prohibited, a selected potential winner may be required to complete and return to Sponsor an Affidavit of Eligibility and a Liability/Publicity Release Form (“Affidavit and Release”) within seven (7) days of receiving the Affidavit and Release. If (a) a potential winner cannot be contacted as specified above; (b) any notification is returned as undeliverable; or (c) a winner is deemed ineligible for any other reason in the sole discretion of Sponsors (or their designee), the potential winner will be disqualified and forfeit the prize and the entrant that was next in line will be considered the winner. Under no circumstances will more than the advertised number of prizes be awarded.
Once informed that you are an official winner, Sponsors shall arrange for the delivery of the Prize.  However, if the winner does not provide Sponsors with a mailing address for the Prize within 7 days of being contacted by Sponsor, the winner will forfeit the prize and a new potential winner will be selected.  Winners are responsible for all federal, state, and local taxes and all other costs and expenses associated with prize not specified herein as being awarded.

This promotion is subject to all applicable United States federal, state, and local laws, rules and regulations. Sponsor reserves the right to substitute a prize (or component thereof) with another prize (or component thereof) of equal or greater value if the prize is not available for any reason, as determined by Sponsor in its sole discretion. All prize details are at Sponsor’s discretion. Issues concerning the construction, validity, interpretation, and enforceability of these Official Rules shall be governed by the laws of the State of New York, without regard to any principles of conflict of laws.  If the controversy or claim is not otherwise resolved through direct discussions or mediation, it shall then be resolved by final and binding arbitration administered by Judicial Arbitration and Mediation Services, Inc., in accordance with its Streamlined Arbitration Rules and Procedures or subsequent versions thereof (“JAMS Rules”).  The JAMS Rules for selection of an arbitrator shall be followed, except that the arbitrator shall be experienced and licensed to practice law in New York.  All disputes arising out of or connected with this promotion will be resolved individually, and without resort to class action.  The Sponsor is not liable for any consequential, indirect, exemplary, or punitive damages, or for attorneys’ fees.
Sponsor, its affiliates, subsidiaries, advertising and promotion agencies, agents and representatives and their respective officers, directors and employees are not responsible for and shall not be liable for: (a) electronic, hardware or software program, network, Internet or computer malfunctions, failures, or difficulties of any kind, including without limitation, server malfunction or by any human error which may occur in the processing of sales data; (b) failed, incomplete, garbled or delayed computer transmissions; (c) lost, late, misdirected or postage-due mail; or (d) any condition caused by events beyond the control of the Sponsor that may cause the promotion to be disrupted or corrupted.
If, for any reason whatsoever, this Sweepstakes, is not capable of running as planned, including, but not limited to, by reason of infection by computer virus, tampering, fraud, technical failures, or any other cause which, in the Sponsor’s judgment, corrupts or affects the administration, security, fairness, integrity or proper conduct of this Sweepstakes, Sponsor reserves the right at its sole discretion to cancel, terminate, modify or suspend this Sweepstakes and limit entries to those submitted prior to the action taken, or to proceed in such a manner as may be deemed fair and equitable by Sponsor.
CAUTION:  ANY ATTEMPT BY AN ENTRANT TO DELIBERATELY UNDERMINE THE LEGITIMATE OPERATION OF THE SWEEPSTAKES MAY BE A VIOLATION OF CRIMINAL AND CIVIL LAWS AND SHOULD SUCH AN ATTEMPT BE MADE, SPONSOR RESERVES THE RIGHT TO SEEK DAMAGES FROM ANY SUCH PERSON TO THE FULLEST EXTENT PERMITTED BY LAW.
Failure by the Sponsor and/or its representatives to enforce any term of these Official Rules shall not constitute a waiver of that provision. Should any provision of these Official Rules be deemed unenforceable or invalid, the other provisions of these Official Rules shall remain in full force and effect. In the event that these Sweepstakes are challenged by any legal or regulatory authority (including but not limited to any federal or state governmental authority), Sponsor reserves the right to discontinue or modify the Sweepstakes, as applicable, or to disqualify any entrants residing in any affected geographic areas, as applicable. In such event, Sponsor and its representative shall have no liability to any entrants who are disqualified due to such an action.

WINNER LIST/OFFICIAL RULES:  To receive a copy of these Official Rules or a list of winners, send an email to fans@chobani.com, with the (i) name of the promotion, (ii) specific promotion period and (iii) whether you are requesting “Official Rules” or “Prize Winners” in the subject line.  All email requests must be received no later than two (2) months after the stated end date of the Promotion Period. 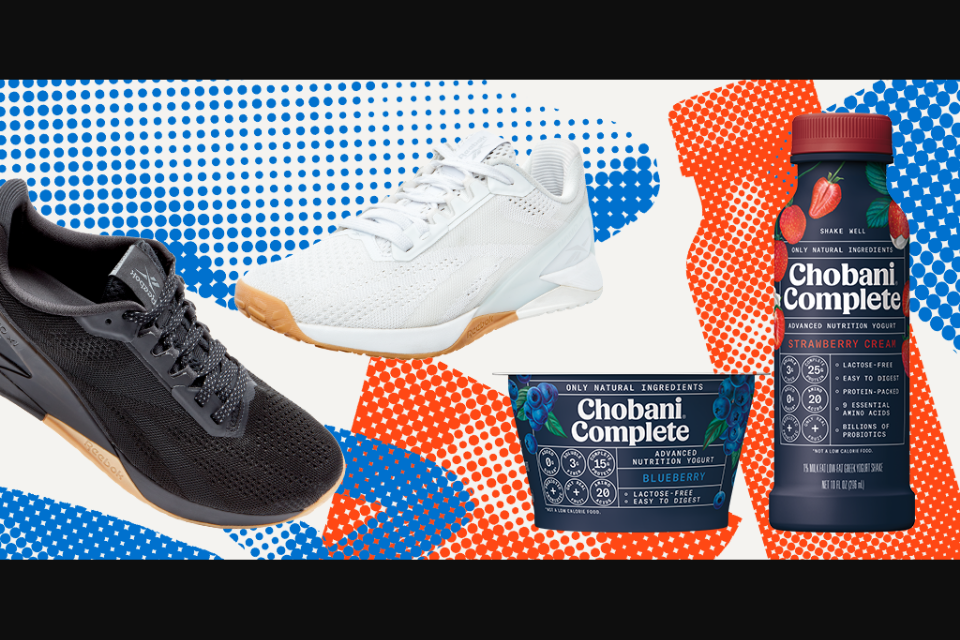 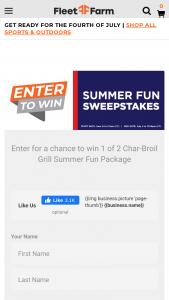 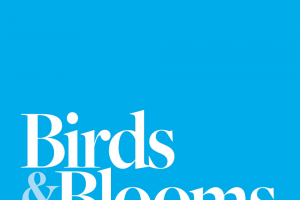 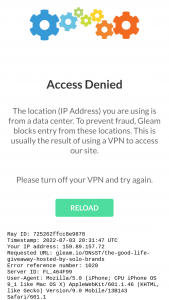 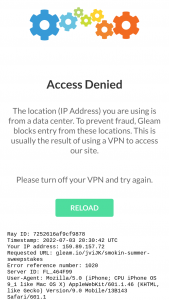 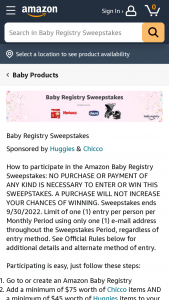 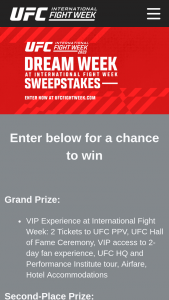 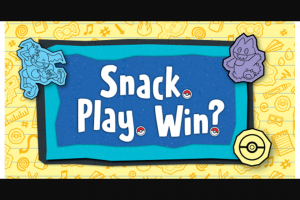 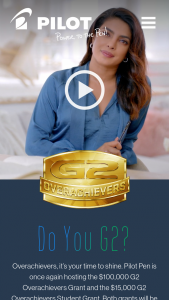 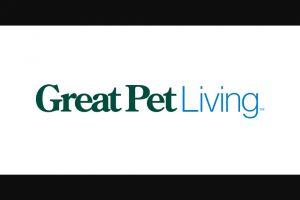 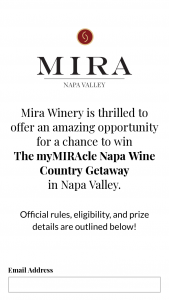 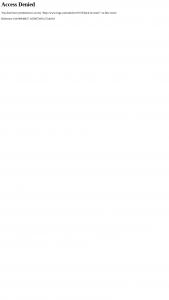 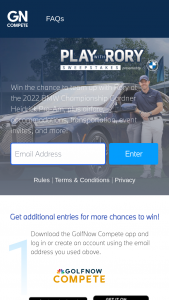 Golfnow – Play With Rory – Win Winner to play with Rory McIlroy at the BMW Championship during the Gardner Heidrick Pro-Am on August 17 2022.
10 days left
Comment
Comment 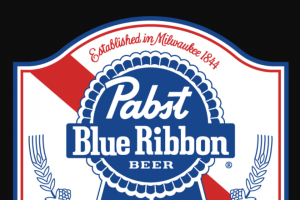 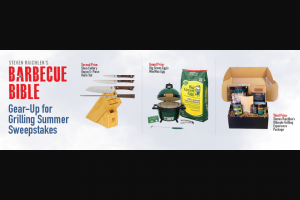 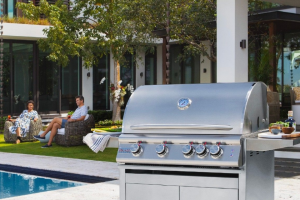 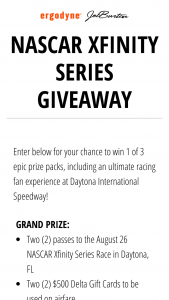