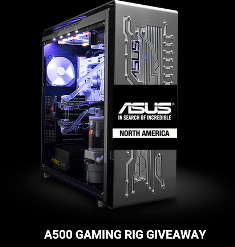 NO PURCHASE NECESSARY. A PURCHASE WILL NOT INCREASE YOUR CHANCES OF WINNING.

To be eligible to participate in the ASUS ‘Project: A500 Gaming Rig
Giveaway’ sweepstakes , an entrant must be a legal resident of the 50
United States (except Rhode Island), the District of Columbia, or Canada (except
Quebec), and be 18 or older and the age of majority within the jurisdiction where the
entrant resides at time of entry in the promotion (which may be 18, 19 or 21 depending
upon the jurisdiction).

3.HOW TO ENTER
To be eligible for the
Promotion, during the Promotional Period, entrant must (1) write a comment into the
corresponding field on the ASUS Woobox Promotion Page during the Promotion Period,
and (2) fill out the contact form completely; Sponsor reserves the right to disqualify
entries which are incomplete. Canadian residents should refer to Section 12 below
about the need to correctly answer a skill-testing question before being declared a
winner. Each individual may enter the Promotion only once regardless of method of
entry. Any additional Submissions beyond the first Submission will be ignored, and not
be eligible for the Promotion. Sponsor reserves the right to disqualify entries which are
(a) incomplete, (b) suspected of being false or answered in bad faith, (c) illegible, (d) contain sexual content or are otherwise offensive or objectionable; or (e) not in compliance with these Official Rules.

3. LICENE TO ASUS ET SEQ. FOR RELEASED PUBLICITY
. By entering the contest, entrants grant ACI a royalty-free, worldwide, perpetual, non-exclusive license to display, distribute, reproduce and create derivative works of the entries, in whole or in part, in
any media now existing or subsequently developed, for any promotional, publicity, and
exhibition purposes. Any such use may or may not include any credit or attribution. ACI
will not be required to pay any additional consideration or seek any additional approval
in connection with such uses. Except as prohibited by law, entrants waive any moral
rights they may have in any Released Publicity Content, even if such Released Publicity Content is altered or changed in a manner not agreeable to entrant.

4. DETERMINATION OF WINNERS
A random drawing will be conducted to determine one (1)
entry as winner, and will take place at Sponsor’s corporate office on the following date: March 13, 2015. The Winner need not be present to win. The announcement of the Winner may take up to ten (10) business days.

5.NOTIFICATION
Winner will be notified within ten (10) business days after the completion
of the Promotion Period via phone or email provided when entering the Promotion. If all Promotion requirements as set forth herein have been satisfied by Winner, the prize will be shipped via freight delivery to Winner’s attention at the shipping address provided by Winner after being notified of winning by Sponsor. If Winner fails to respond to the
notification with a valid shipping address within five (5) business days of notification
from Sponsor, the prize will be forfeited, and at Sponsor’s discretion may be re-
submitted for a new drawing. Prizes will be shipped approximately one (1) month after completion of the Promotion Period.

6.PRIZE
The Winner of the Promotion will receive one (1)
Custom-built PC, with an approximate retail value (“ARV”) of five thousand US dollars
($5,000 USD). Total ARV of all prizes: $5000 USD. Winner understands and agrees that
the Prize is being provided “AS-IS,” and Sponsor makes no warranty, representation, or
guarantee regarding any Prize, including but not limited to its quality, condition,
merchantability, or fitness for a particular purpose. Winner must look solely to the
manufacturer for any such warranties or guarantees, if any. Prizes consist of only the
items specifically described herein, and no additional items, services or subscriptions are
included. The ARV of Prizes is subject to price fluctuations in the consumer marketplace
based on, among other things, any gap in time between the date the ARV is estimated
for purposes of these Official Rules and the date the Prize is awarded or redeemed.
Prizes are non-transferable and no substitution will be made unless Sponsor, in its sole discretion, determines otherwise. Sponsor reserves the right to substitute a Prize for one of equal or greater value should it become unavailable for any reason.
7. TAXES
Winner is solely responsible for any taxes related to a Prize. All federal, state,
provincial and local taxes on the Prize are the sole responsibility of Winner.
8.HOW TO CLAIM THE PRIZE
Winners must meet all eligibility requirements set forth in these
Official Rules to qualify for the Prize. Winner must complete an Affidavit of Eligibility,
Liability & Publicity Release, or the Prize may be forfeited and awarded to an alternate
Entrant. If a Canadian resident, a Winner may be required to correctly answer a time-
limited skill testing question administered by phone without any assistance in order to
be eligible to receive a prize. If a Winner is a Canadian resident and the question is
answered incorrectly, the prize will be forfeited. If a potential winner is considered a
minor in his or her state or province of residence, at Sponsor’s option, the applicable
Prize may be awarded in the name of the parent or legal guardian of the potential
winner, provided the parent or legal guardian of the potential winner signs the Affidavit
of Eligibility, Liability & Publicity Release for the minor. In the event that a potential
winner is disqualified for any reason, or does not respond to the notification message
from Sponsor, Sponsor will randomly draw another Entrant.

10. NO TRANSFER
Prize is not transferable and no cash alternative or prize substitutions are
available, except that Sponsor reserves the right to substitute cash or a similar prize of
equal or greater value should the Prize described be unavailable for any reason. In the
event a Winner does not accept delivery of the Prize, such Prize may be used as an
award at a future event.
11.RELEASE
Entrant represents and warrants that it has, or has obtained, the necessary
rights and permissions to submit the Submission and to grant Sponsor the rights under
Section 7. By entering the Promotion, Entrant releases and agrees to hold harmless
Sponsor and Sponsor’s suppliers, parents, affiliates, subsidiaries, and their officers,
directors, employees, representatives, agents, advertising, promotion, production and
fulfillment agencies, successors and assigns (collectively, “Released Parties”) from and
against all liability of any kind in connection with 3 the Promotion, including without
limitation any costs, fees, expenses, or damages incurred in the use of the Prizes.

12. LICENE TO SPONSOR
Acceptance of any Prize shall constitute and signify Winner’s
agreement and consent to Sponsor’s use of Winner’s name, city, state, likeness,
Submission content, and Prize information, worldwide, including the Internet, without
limitation and without further payment or consideration, except where prohibited by
law. Making a Submission constitutes Entrant’s consent to give Sponsor a royalty-free,
irrevocable, perpetual, non-exclusive license to use, reproduce, modify, publish, create
derivative works from, and display such Submissions in whole or in part, on a worldwide
basis, and to incorporate it into other works, in any form, media or technology now
known or later developed, including for promotional or marketing purposes. If
necessary, Entrant will sign any documentation that may be required for Sponsor or its
designees to make use of the non-exclusive rights Entrant is granting to use the
Submission.

13. LIMITATIONS OF LIABILITY
The Released Parties are not responsible for: (1) any incorrect or
inaccurate information, whether caused by Entrant, printing errors or by any of the
equipment or programming associated with or utilized in the Promotion; (2) technical
failures of any kind, including, but not limited to malfunctions, interruptions, or
disconnections in phone lines or network hardware or software; (3) unauthorized
human intervention in any part of the entry process or the Promotion; (4) technical or
human error which may occur in the administration of the Promotion or the processing
of entries; (5) late, lost, undeliverable, damaged or stolen mail; or (6) any injury or
damage to persons or property which may be caused, directly or indirectly, in whole or
in part, from Entrant’s participation in the Promotion or receipt or use or misuse of any
Prize. Sponsor is not responsible for misdirected or undeliverable entries or for any
technical problems, malfunctions of computer systems, servers, providers,
hardware/software, lost or unavailable network connections or failed, incomplete,
garbled or delayed computer transmission or any combination thereof. Sponsor is
not responsible for any typographical/other error in entries, selection announcement or
for any liability for damage to any computer system resulting from participation in,
accessing or downloading information in connection with this Promotion. If for any
reason an entry is confirmed to have been erroneously deleted, lost, or otherwise
destroyed or corrupted, Entrant’s sole remedy is another entry. No more than the
stated number of Prizes will be awarded.

14.DISPUTES
Except where prohibited, Entrant agrees that: (1) any and all disputes,
claims and causes of action arising out of or connected with this Promotion or any Prize
awarded shall be resolved individually, without resort to any form of class action, and
exclusively by the United States District Court for the Northern District of California or
the Santa Clara County Superior Court, U.S.A; (2) any and all claims, judgments and
awards shall be limited to actual out-of-pocket costs incurred, including costs associated
with entering this Promotion, but in no event attorneys’ fees; and (3) under no
circumstances will Entrant be permitted to obtain awards for, and Entrant hereby
waives all rights to claim, indirect, punitive, incidental and consequential damages and
any other damages, other than for actual out-of-pocket expenses, and any and all rights
to have damages multiplied or otherwise increased. All issues and questions concerning
the construction, validity, interpretation and enforceability of these Official Rules, or the
rights and obligations of the Entrant and Sponsor in connection with the Promotion, shall be governed by, and construed in accordance with, the laws of the State of California without giving effect to any choice of law or conflict of law rules.

Dr Pepper Popeyes – Win a trip for 2 to Nassau, Bahamas to attend the 2015 Bahamas Bowl or the 2016 Bahamas Bowl and more great prizes by October 25, 2015 – INSTANTLY!
Expired
Comment
Comment 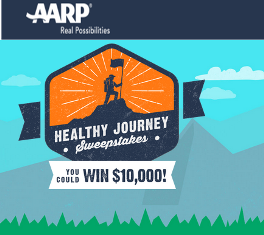