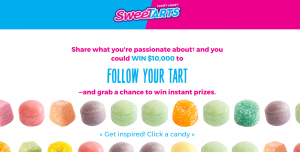 1. Eligibility: SweeTARTS Follow Your Tart Promotion (the “Promotion”) is open only to legal residents of the fifty (50) United States (including District of Columbia) who are at least eighteen (18) years old and legal residents of Canada who are at least the age of majority in their province of residence at the time of entry. Employees of Nestlé USA, Inc., HelloWorld, Inc., and their parent and affiliate companies, suppliers as well as the immediate family (spouse, parents, siblings and children) and household members of each such employee are not eligible. The Promotion is subject to all applicable federal, state, provincial, territorial, municipal, and local laws and regulations and is void where prohibited. Participation constitutes entrant’s full and unconditional agreement to these Official Rules and Sponsor’s and Administrator’s decisions, which are final and binding in all matters related to the Promotion. Winning a prize is contingent upon fulfilling all requirements set forth herein.
Promotion Details:

CANADIAN RESIDENTS: SweeTARTS Follow Your Tart (the “Promotion”) consists of a sweepstakes (the “Sweepstakes”).

UNITED STATES RESIDENTS: SweeTARTS Follow Your Tart (the “Promotion”) consists of the same Sweepstakes that Canadian residents can participate in, as well as an instant win game (the “Instant Win Game”).

Administrator’s computer is the official time keeping device for this Promotion.

4. How to Enter:
For Residents of Canada: During the Canadian Sweepstakes Period, visit http://www.followyourtart.ca and complete and submit the registration form including a valid email address. Valid entrants will receive one (1) entry into the Sweepstakes only. Canadian residents will not be able to play the Instant Win game.