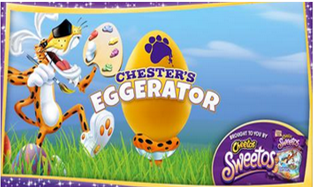 NO PURCHASE OR PAYMENT OF ANY KIND IS NECESSARY TO ENTER OR WIN. A PURCHASE WILL NOT INCREASE YOUR CHANCE OF WINNING.

1. ELIGIBILITY:
The Promotion is open only to legal residents of any of the 50 United States or District of Columbia, who are 13 years of age or older at the time of participation. The following persons are not eligible to participate:

2. PROMOTION PERIOD:
Promotion begins at 12:00:00 p.m. (noon) Central Time (“CT”) on March 2, 2015 and ends at 11:59:59 p.m. CT on April 5, 2015 .
3. HOW TO PARTICIPATE:
The Promotion consists of a random drawing (the “Random Drawing”) and an instant win game (the “Instant-Win Game”). To participate in the Promotion, visit www.cheetos.com (“Web Site”), during the Promotion Period, look for the Promotion mention and follow the online instructions.
Step 1: Design a digital egg using the online egg-creator tool. For each egg that you create and post to the online gallery, you will receive one (1) entry into the Random Drawing for a chance to win the Grand Prize and an opportunity to play the Instant-Win Game. To receive bonus entries into the Random Drawing, share your egg(s) via Facebook, Pinterest or Twitter as indicated on the Web Site. Each time you share an egg through the Web Site including the hashtag #Cheetossweeps, you will receive one (1) bonus entry into the Random Drawing. See Rule #4 for Random Drawing details. Egg designs/entries will not be judged. Limit 10 entries and 10 bonus entries per person/email address per day for the Random Drawing. A “day” is defined as a twenty-four (24) hour time period beginning at 12:00:00 a.m. CT and ending at the following 11:59:59 p.m. CT, with the exception of the first day of the Promotion Period which shall begin at 12:00:00 p.m. CT and end the following 11:59:59 p.m. CT.
Step 2: Play the Instant-Win Game. The first time you play the Instant-Win Game, a Bag Code (defined below) is not required. All subsequent Plays (as defined below) require a Bag Code. To obtain a Bag Code, purchase any CHEETOS® product, during the Promotion Period, and look for the 9-digit product code below the “Guaranteed Fresh” statement on the front of the CHEETOS® brand product package (each a “Bag Code”). See www.cheetos.com for complete list of CHEETOS® products and information about how to locate Bag Code on CHEETOS® packages. For a free Bag Code, call toll free 1-866-591-1960 during the Promotion Period, and follow automated instructions. For each completed call, you will receive one (1) free Bag Code. Limit one (10) free Bag Codes per person/day.
Upon obtaining a Bag Code, input your Bag Code as indicated at the Web Site (each a “Play”). If your computer screen displays a prize-winning message, you are a potential winner of the Instant-Win Prize as indicated in the message (subject to verification). If your computer screen displays a non-winning prize message, you are not a winner of an Instant-Win Prize. Randomly selected times, during the Promotion Period, will be chosen by the independent judging organization (the “Judges”), and the first participant who completes a Play in accordance with these Official Rules (whose Play is properly received and recorded by administrator’s computer on or immediately after a randomly selected time during the Promotion Period) will win a prize (subject to verification). All Plays must be properly received and recorded within the Promotion Period in order to be eligible to win a prize. Odds of winning an Instant-Win Prize depend on the number of eligible Plays received and the order in which they are received.
Limit 10 Plays per person/email address per day for the Instant-Win Game.
All participants must have a valid email address. In the event of an identity dispute, an entry and/or Play will be considered made by the registered owner of the email address used for the entry or Play. It is solely the responsibility of the participant to notify Sponsor in writing if the participant changes his or her email address during the Promotion Period. Sponsor and its agencies will not accept entries or Plays that are late, incomplete, misdirected, or unintelligible. Use of any robotic, automatic, programmed or similar methods of entering the Random Drawing or submitting a Play in the Instant-Win Game will void all entries or Plays (as applicable) and result in disqualification.
4. RANDOM DRAWING:
The Grand Prize winner will be selected in a random drawing to be held on or about April 7, 2015 from all eligible entries received by an independent judging agency, whose decisions are final in all matters relating to this Promotion. Odds of winning the Grand Prize depend on the number of eligible entries received.