1.ELIGIBILITY
Starburst® Summer Sweeps is open only to legal residents of the fifty (50) United States and the District of Columbia who are at least eighteen (18) years old at the time of entry.

3.HOW TO ENTER
During the Promotion Period, visit www.moviefone.com or the Moviefone page on Facebook (www.facebook.com/moviefone) and follow the links and instructions to complete and submit the registration form, including your email address, state of residence, and date of birth. Once you submit the form, the Instant Win Game results will be displayed on screen indicating whether or not you are a winner. A win message will include delivery of the prize as a digital code. Administrator is responsible for the functionality of the Instant Win Game.
Limit: Each entrant may play one (1) time per day during the Promotion Period. Multiple entrants are not permitted to share the same email address. Any attempt by any entrant to obtain more than the stated number of plays by using multiple/different email addresses, identities, registrations and logins, or any other methods will void that entrant’s plays and that entrant may be disqualified. Use of any automated system to participate is prohibited and will result in disqualification. In the event of a dispute as to any registration or play, the authorized account holder of the email address used to register will be deemed to be the entrant or player. The “authorized account holder” is the natural person assigned an email address by an Internet access provider, online service provider, Internet service provider, or other organization responsible for assigning email addresses for the domain associated with the submitted address. Each potential winner may be required to show proof of being the authorized account holder. Any play that occurs after the system has failed for any reason is deemed a defective play, is void, and will not be honored.

4. INSTANT WIN GAME PRIZE SELECTION
Receiving a prize is contingent upon compliance with these Official Rules. Administrator is an independent judging organization whose decisions as to the administration and operation of the Instant Win Game and the selection of potential winners are final and binding in all matters related to the Instant Win Game. Odds of winning a prize for each Instant win play are 1:100. In the event that a potential winner of a prize is disqualified for any reason, or if any prizes remain unawarded at the end of the Promotion Period, Sponsor will award the applicable prize(s) to a/an alternate winner(s) by random drawing from among all remaining eligible entries.

5.PRIZES
ONE THOUSAND ONE (1,001) GRAND PRIZES: Each Winner will receive a Fandango Promotional Code via a win message displayed on screen valid for a movie ticket (up to $12 total value) to see any movie at Fandango partner theaters in the U.S., at any showing including those designated as “no coupons, no passes” in local theater listing guides. Fandango Promotional Code must be redeemed by 9/30/15 and is void if not redeemed by the expiration date. Only valid for purchases made at www.moviefone.com or via the Fandango app for Fandango partner theaters in the U.S. and cannot be redeemed directly at any Fandango partner theater box office. If lost, cannot be replaced. No reproductions will be accepted. No cash value. Not valid with any other offer. Offer valid in U.S. and valid for one-time use only. Not for resale; void if sold or exchanged. If movie ticket with Fandango’s convenience fee included is more than maximum value of the Fandango Promotional Code then user must pay the difference. Any price difference between movie ticket purchased and maximum value of the Fandango Promotional Code will not be refunded.
• Approximate Retail Value (“ARV”): $12 USD.
Neither Fandango nor Fandango Loyalty Solutions, LLC is a co-sponsor or sponsor of this promotion. The redemption of Fandango Promotional code is subject to Fandango’s terms and conditions at www.fandango.com/termsofuse.aspx and www.fandango.com/PurchasePolicy.aspx. Sponsor and Administrator are not responsible for complaints or issues regarding codes (claims that code is invalid, insufficient, etc.) and winner should address any such issues with the issuer of the code. No cash or other substitution, assignment or transfer of any prizes permitted, except by Sponsor, who reserves the right to substitute a prize or prize component with cash or another prize of comparable or greater value. Winners are responsible for all federal, state, and local taxes and fees associated with prize receipt and/or use. Prizes will be awarded “as is” with no warranty or guarantee, either express or implied offered by Sponsor. TOTAL ARV OF ALL PRIZES: $12,012. Limit: One (1) Instant Win Game prize per person.

6.PUBLICITY
Except where prohibited, participation in the Instant Win Game constitutes winner’s consent to Sponsor’s use of winner’s name, likeness, photograph, voice, opinions, biographical information, hometown, and state for promotional purposes in any media without further payment or consideration.

8.RELEASE
By receipt of any prize, winner agrees to release and hold harmless Sponsor, AOL, Inc., Wm. Wrigley Jr. Company, Woobox, LLC, Fandango Loyalty Solutions, LLC, Facebook, Inc., HelloWorld, Inc., and any promotional partners, each of their parent, subsidiary, affiliate, and related companies, and each of its and their respective officers, directors, employees, and agents (collectively the “Released Parties”) from and against any losses, damages, rights, claim, or cause of action of any kind arising, in whole or in part, directly or indirectly, out of participation in the Instant Win Game or resulting directly or indirectly, from acceptance, possession, use, or misuse of any prize awarded in connection with the Instant Win Game, including without limitation personal injury, death, and/or property damage, as well as claims based on publicity rights, defamation, and/or invasion of privacy.

9 LIMITATIONS OF LIABILITY
The Released Parties are not responsible for: (1) any incorrect or inaccurate information, whether caused by entrants, printing errors or by any of the equipment or programming associated with or utilized in the Instant Win Game; (2) technical failures of any kind, including, but not limited to malfunctions, interruptions, or disconnections in phone lines, or network hardware, or software; (3) unauthorized human intervention in any part of the entry process or the Instant Win Game; (4) technical or human error which may occur in the administration of the Instant Win Game or the processing of entries; or (5) any injury or damage to persons or property which may be caused, directly or indirectly, in whole or in part, from entrant’s participation in the Instant Win Game, or receipt, or use of any prize or while traveling to or from any prize-related activity. If for any reason an entrant’s entry is confirmed to have been erroneously deleted, lost, or otherwise destroyed or corrupted, entrant’s sole remedy is another entry in the Instant Win Game, if it is possible. No more than the stated number of prizes will be awarded. In the event that production, technical, seeding, programming, or any other reasons cause more than the stated number of prizes as set forth in these Official Rules to be available and/or claimed, Sponsor reserves the right to award only the stated number of prizes by a random drawing among all legitimate, un-awarded, eligible prize claims.

10.DISPUTES
Entrant agrees that: (i) any and all disputes, claims, and causes of action arising out of or connected with this Instant Win Game or any prizes awarded shall be resolved individually, without resort to any form of class action, and exclusively by the United States District Court for the Eastern District of Michigan (Southern Division) or the appropriate Michigan State Court located in Oakland County, Michigan; (ii) any and all claims, judgments, and awards shall be limited to actual out-of-pocket costs incurred, including costs associated with entering this Instant Win Game but in no event attorneys’ fees; and (iii) under no circumstances will entrant be permitted to obtain awards for and entrant hereby waives all rights to claim punitive, incidental, and consequential damages and any other damages, other than for actual out-of-pocket expenses, and any and all rights to have damages multiplied or otherwise increased. SOME JURISDICTIONS DO NOT ALLOW THE LIMITATIONS OR EXCLUSION OF LIABILITY FOR INCIDENTAL OR CONSEQUENTIAL DAMAGES, SO THE ABOVE MAY NOT APPLY TO YOU. All issues and questions concerning the construction, validity, interpretation, and enforceability of these Official Rules, or the rights and obligations of the entrant and Sponsor in connection with the Instant Win Game, shall be governed by, and construed in accordance with, the laws of the State of Michigan, without giving effect to any choice of law or conflict of law rules (whether of the State of Michigan or any other jurisdiction), which would cause the application of the laws of any jurisdiction other than the State of Michigan. 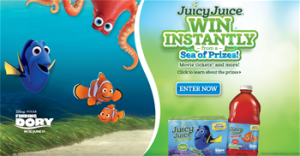 Coca-Cola – Win high-octane offers, prizes, and coupons, including the Grand Prize trip for 2 to a NASCAR race of your choice by August 31, 2015 – INSTANTLY!
Expired
Comment
Comment 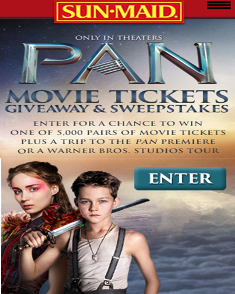 Sun Maid – Win a trip for 2 to the Pan movie in New York, NY or a trip to go on a Warner Bros, studio tour and more by October 17, 2015
Expired
Comment
Comment

Mike and Ike – Win Movie tickets for a year and 100 pairs of movie tickets by February 28, 2016!
Expired
Comment
Comment 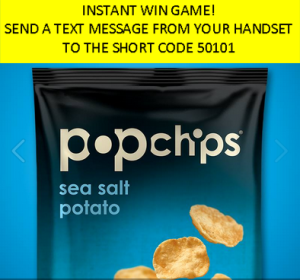 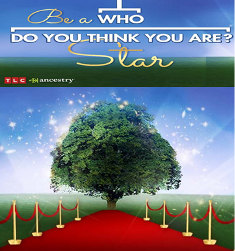 TLC – Win a trip for 2 to the Winner’s ancestral homeland as well as a trip to Hollywood, CA to attend a movie premiere and more WEEKLY prizes!
Expired
Comment
Comment