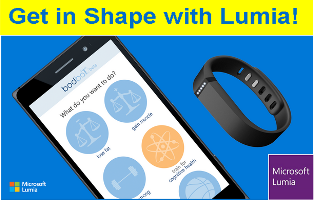 GET IN HAPE WITH LUMIA SWEEPSATKES

1. ELIGIBILITY:
Sweepstakes brought to you by Microsoft Mobile Oy , is governed by these Official Rules. This Sweepstakes is open to legal residents of the 50 United States or DC who are 16 years of age or older. If an Entrant has not reached the age of majority in their state of residence, a parent / legal guardian must grant permission and agree to these Official Rules. Void where prohibited.