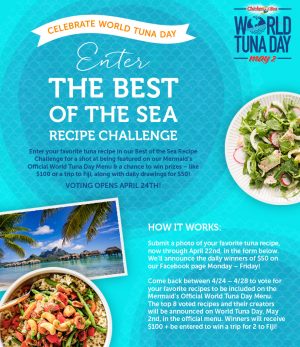 Chicken of The Sea International – The Best of The Sea Recipe Challenge A World of Tuna Day – Win a trip for 2 to Nadi, Fiji OR 1 of 15 Daily Visa Gift Cards

NO PURCHASE NECESSARY TO ENTER OR WIN.
VOID WHERE PROHIBITED.

This promotion is in no way sponsored, endorsed or administered by or associated with Facebook®. You understand
that you are providing your information to Chicken of the Sea International and not to Facebook. Any questions,
comments or complaints regarding the Promotion must be directed to the Sponsor and not to Facebook.

1) Promotion Description: Chicken of the Sea International (the “Sponsor”) is offering the “The Best of the
Sea Recipe Challenge” (the “Promotion”) and will determine winners and award prizes via a combination of
random drawings, the decisions of a judging panel and user voting.

The Promotion begins April 3, 2017 at 12:00:01 AM Pacific Time (“PT”) and ends at 11:59:59 PM PT on April 28, 2017 (“Promotion Period”).
Within the overall Promotion Period, the promotion will be conducted in the following phases:
a. Recipe Submission Period: Begins April 3, 2017 at 12:00:01 AM PT and ends April 22, 2017 at
11:59:59 PM PT (“Recipe Submission Period”). During the Recipe Submission Period, fifteen (15)
daily drawings (“Daily Drawings”) will be conducted in which one (1) individual (per Daily Drawing)
who submitted a recipe will be randomly selected to win a $50 VISA® Gift Card. The Daily Drawings
will be conducted on the following days during the Recipe Submission Period: April 3 – April 7, 2017,
April 10-14, 2017 and April 17-21, 2017. Recipe Submissions are eligible for the Daily Drawing
Periods in which they are received and will be “rolled forward” for inclusion in any subsequent Daily
Drawings. There is a limit of one (1) Daily Drawing Prize per person.
b. Judging Period: At the conclusion of the Recipe Submission Period, the Sponsor’s judging panel will
determine twenty-five (25) finalists (“Finalists”) on the basis of “most appealing/interesting” recipe
submitted. The Finalists will advance to the user voting period.
c. User Voting Period: Begins April 24, 2017 at 12:00:01 AM PT and ends April 28, 2017 at 11:59:59 PM
PT (“User Voting Period”). At the end of the User Voting Period the eight (8) Recipe Submissions
receiving the greatest number of votes will be determined as the recipe contest winners (“Recipe
Contest Winners”). In the event of a tie at any level, the Sponsor’s judging panel will determine the
final eight (8) Recipe Contest Winners. Each of the Recipe Contest Winners will receive a $100 VISA®
Gift Card as well as having their Recipe Submissions featured in the Chicken of the Sea “World Tuna
Day Menu” which will be published online on or about 5/2/17.
d. Grand Prize Drawing: Each of the eight (8) Contest Winners will be eligible for inclusion in the final
Grand Prize Drawing. On or about May 1, 2017, a random drawing will be conducted to select one (1)
Grand Prize Winner of a trip for two to Fiji.

3) How to Enter: The Promotion (Recipe Submission as well as User Voting) is available at
www.facebook.com/ChickenoftheSea and www.ChickenoftheSea.com (“Promotion Sites”).
To enter the Promotion – Submit your favorite tuna recipe at a Promotion Site by providing a brief description of the
recipe as well as a picture of the finished/prepared dish. There is no limit to the number of Recipe Submissions you
submit, however each must be unique and completely different from any earlier Recipe Submission you have made.
Complete the registration form to include your first/last name and email address.
To vote in the Promotion – During the User Voting Period visit either of the Promotion Sites to review the twenty-five
(25) Finalists and then cast your vote for your favorite Recipe Submission. There is a limit of one (1) vote per person
per IP address per day. A day is defined as any twenty-four (24) period beginning at 12:00:01 AM PT and ending at
11:59:59 PM PT during the User Voting Period.
Any Promotion activity you engage in at www.facebook.com/ChickenoftheSea must be in accordance with Facebook
Terms of Service at https://www.facebook.com/legal/terms. Creation of false accounts on Facebook is prohibited.
Message, data rates or other charges may apply (if you participate via your mobile device); check your mobile plan for
rates and details. Participation may not be available on all carriers. In the event of a dispute as to any Recipe
Submission made on Facebook, the authorized account holder of the Facebook account used to enter will be deemed
to be the entrant. The “authorized account holder” is the natural person assigned the account by the online service
provider or other organization responsible for assigning the accounts. You may be required to show proof of being an
authorized account holder.
By submitting your Recipe Submission, you agree that it conforms to these Official Rules and that Sponsor, in its sole
discretion, may disqualify your Recipe Submission for any reason at any time, including if it determines, in its sole
discretion, that it fails to conform to these Official Rules in any way or otherwise contains unacceptable content as
determined by Sponsor, in its sole discretion.
In Sponsor’s sole opinion, Recipe Submissions which do not meet any of these requirements and/or which Sponsor
deems in its sole discretion is negative, offensive or controversial in any way will be disqualified and removed from the
Promotion. Without in any way limiting, expanding or amending the Terms of Service at
http://chickenofthesea.com/privacy or Facebook.com, which shall remain in full force and effect, if Sponsor is duly
notified that any element of a Recipe Submission infringes upon the rights of another person and/or receives a legally
valid request to remove or invalidate the affected Recipe Submission because of such infringement, such Recipe
Submission will be removed and disqualified from the Promotion, as Sponsor may determine in its sole discretion.
Recipe Submissions must comply with the following requirements:
a. The Recipe Submission may not contain any content that is lewd, obscene, sexually explicit, pornographic or
contains nudity, disparaging, defamatory, derogatory toward any ethnic, racial, gender, religious, professional or
age group, libelous, obscene, or that otherwise contains inappropriate content or objectionable material as
determined by Sponsor in its sole and unfettered discretion.
b. The Recipe Submission must not promote alcohol, illegal drugs, tobacco, firearms/weapons (or the use of any of
the foregoing), promote any activities that may appear unsafe or dangerous or promote any particular political
agenda or message.
c. The Recipe Submission must not defame, misrepresent or contain disparaging remarks about Sponsor, other
people or companies.
d. The Recipe Submission must not infringe the copyright, trademark, privacy, publicity, or other intellectual rights
of any person or entity, including, without limitation, copyrighted materials owned by others (including
photographs, sculptures, paintings, and other works of art or images published on or in websites, television,
movies or other media).
e. No photos of individuals may be included in the Recipe Submission.
f. The Recipe Submission must not contain any personally identifiable information of any person other than the
Entrant, such as license plate numbers, personal names, e-mail addresses or street addresses.
g. The Recipe Submission may not identify any commercial content, including, without limitation, any trademarks,
logos, or trade dress (such as distinctive packaging or building exteriors/interiors), except for those owned by
Sponsor, which must be used in compliance with these Official Rules.
h. The Recipe Submission must not contain materials embodying the names, likenesses, voices, or other indicia
identifying any person, other than the Entrant.
i. The Recipe Submission must not communicate messages or images inconsistent with the positive images and/or
good will to which Sponsor wishes to associate.
j. The Recipe Submission must not violate any law.

11) Communication – Any questions or comments regarding this Promotion should be directed to Chicken of the
Sea International via email to: TheMermaid@ChickenoftheSea.com