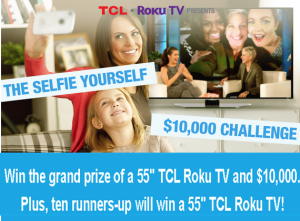 NO PURCHASE NECESSARY TO ENTER OR WIN A PRIZE. A PURCHASE WILL NOT INCREASE YOUR CHANCES OF WINNING. THIS IS A CONTEST OF SKILL. VOID WHERE PROHIBITED.

1. ELIGIBILITY:
The Contest is open to individuals who meet the following criteria: (a) are eighteen (18) years of age or older and (b) are a legal resident of and physically residing in one of the 50 United States or the District of Columbia
Additionally, immediate family members of such employees and persons living in the same household as such employees (whether related or not) are not eligible to win. For the purposes of this Contest, “immediate family members” is defined as spouse, domestic partner, mother, father, grandmother, grandfather, children, siblings and their spouses. Winners of the “TCL Roku TV Presents The Selfie Yourself Local Challenge” are not eligible for the Contest.
By entering this Contest, Contestants agree to be bound by these Official Rules and the decisions of the Sponsor, which are final and binding in all respects and cannot be challenged or appealed.

2.HOW TO ENTER:
Online entry is the only method of entry for the Contest.
Entries received before and/or after the Contest Period will be void. All entries become the sole property of Sponsor and will not be acknowledged or returned.
Sponsor’s computer will serve as the official time piece for the Contest.
To Enter:
If the Contestant meets the eligibility criteria set forth above, then in order to enter Contestant he/she must go to the “The Ellen DeGeneres Show” webpage located at http://www.ellentv.com/TCLRoku during the Contest Period and follow the steps below:
1. To be considered for the Contest, Contestant must first access the contest webpage, located at http://www.ellentv.com/TCLRoku
2. Contestant must then submit the following:
• Personal Information: Contestant’s first name, last name, e-mail address, home phone number, mailing address, date of birth and social media handles as requested by Sponsor (“Personal Information”).
• Contestant will also be required to check a box acknowledging that Contestant is at least 18 years of age and another box that Contestant has read and accepts this Contest’s Official Rules.
• An original selfie of the Contestant (i.e., a self-portrait photograph taken with a hand-held camera or camera phone) in front of a television showing Ellen DeGeneres in the episode of “The Ellen DeGeneres Show” which aired on the day of entry and a short statement about why the Contestant deserves to win the Contest (collectively, the “Statement”).
Contestant’s entry must be received by Sponsor between 6:00:00 a.m. PT on Monday, March 23, 2015 and 11:59:59 p.m. PT on Sunday, March 29, 2015.
A qualifying entry requires all of the following elements submitted via http://www.ellentv.com/TCLRoku:
1. Acknowledgment that Contestant meets the eligibility requirements criteria: Contestant is at least eighteen (18) years of age and a resident of one of the 50 United States (excluding Puerto Rico, Guam, American Samoa, United States territories, possessions, and protectorates, foreign based United States military installations and wherever restricted or prohibited by law) or the District of Columbia.
2. The required Personal Information, as described above.
3. The Statement, as described above.
By submitting any entry into the Contest, whether complete or not and whether eligible or not, each entrant represents and warrants to Sponsor and the Sponsor Entities that the entry (including, without limitation, the Statement): (a) is the entrant’s original creation; (b) has not copied, in whole or in part, any other work; (c) does not violate or infringe any copyright, trademark, patent, trade secret, privacy or publicity right, or other proprietary or intellectual property right of any person or entity; (d) is not defamatory, libelous, obscene, or otherwise illegal; and (e) is the sole and exclusive property of the entrant, and is not subject to any third-party rights. Submission of false or misleading personal information (including the Statement) or copied, plagiarized, offensive or otherwise inappropriate Statements (as determined by Sponsor in its sole discretion) will be grounds for disqualification of entry. Entries generated by a script, macro or other automated means will be disqualified. Illegible or incomplete entries, as determined by Sponsor in its sole discretion, will be disqualified. Sponsor will not deem proof of submission of an entry as proof of receipt of an entry.
LIMIT: One (1) entry per Contestant per day during the Contest Period. In the event that a Contestant exceeds the limit, Sponsor may, at Sponsor’s sole discretion, either disqualify all entries by the Contestant or select, at Sponsor’s sole discretion, one (1) entry for judging and reject the remainder.
3.WINNER SELECTION PROCESS:
Following the conclusion of the Contest Period, Sponsor will select approximately twenty (20) Statement entries from eligible entries for final voting by the judging panel. The finalists’ Statements will be voted on by a panel of judges selected by Sponsor in Sponsor’s sole discretion. The winning Statement will be determined, at the sole discretion of the judging panel, based 33.3% on creativity, 33.3% on originality, and 33.3% on appropriateness to the theme of the Contest (i.e., a selfie showing the Contestant in front of a television showing Ellen DeGeneres the applicable episode of “The Ellen DeGeneres Show” and why the Contestant deserves to win). The Statement entry receiving the most votes by the judges will receive the Grand Prize. Remaining finalists will be voted on by the judging panel for the First Prizes. The Grand Prize and First Prizes are collectively referenced to herein as the “Prize.” The winning Statements will be selected by the judges on or around May 20, 2015. In the event of a tie, the potential winner will be the Contestant whose Statement is considered more creative as determined by the judges.
The Winner of the Grand Prize and the First Prizes are referenced collectively hereinafter as the “Prizewinner”.
If a potential Prizewinner is found ineligible or fails to comply with these Official Rules, such Contestant’s claim to the Prize is forfeited and an alternate qualifying and eligible Contestant may be contacted, at Sponsor’s sole discretion.
All Prizes legitimately claimed will be awarded.
4.PRIZES:
The award of all prizes is subject to verification of eligibility and compliance with these Official Rules.
Grand Prize: One (1) Grand Prize winner will receive one (1) 55” TCL Roku TV and a one-time payment of Ten Thousand Dollars ($10,000). Approximate retail value (“ARV”) of Grand Prize is Ten Thousand Dollars Six Hundred and Ninety Nine Dollars ($10,699.00).
First Prizes: Ten (10) First Prize winners will each receive one (1) 55” TCL Roku TV. ARV of each First Prize is Six Hundred and Ninety Nine Dollars ($699.00).
ARV of all prizes to be awarded in the Contest: $17,689.00. 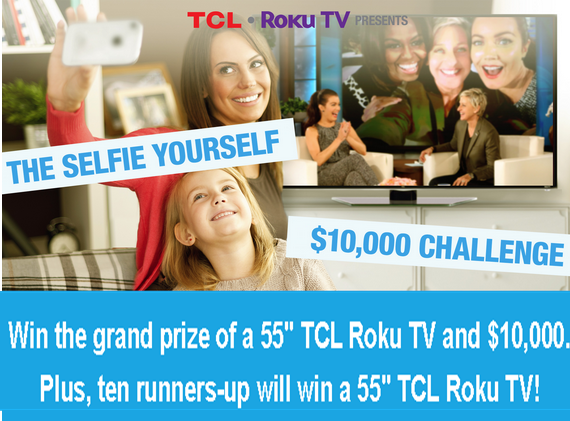 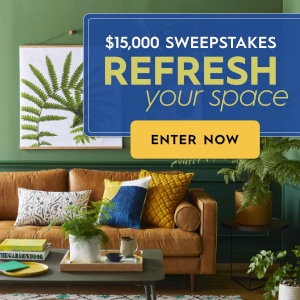 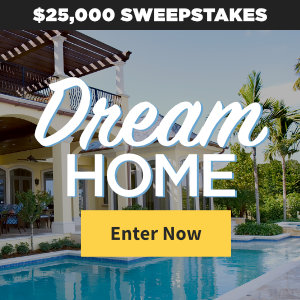 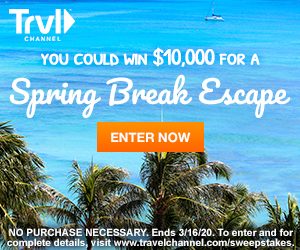 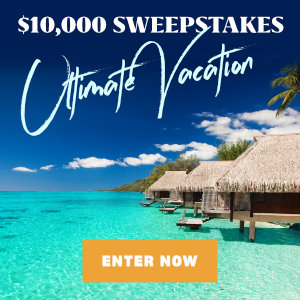