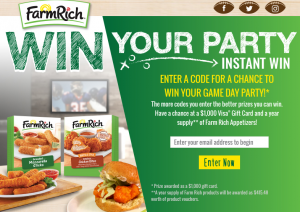 NO PURCHASE OR PAYMENT NECESSARY TO ENTER, WIN OR CLAIM PRIZES. A
PURCHASE OR PAYMENT WILL NOT INCREASE AN ENTRANT’S CHANCES OF
WINNING.
OPEN ONLY TO LEGAL RESIDENTS OF THE 50 UNITED STATES AND THE DISTRICT OF
COLUMBIA (“D.C.”) WHO ARE AT LEAST 18 YEARS OLD AT THE TIME OF ENTRY (AT
LEAST 19 IN AL AND NE).
VOID OUTSIDE THE 50 U.S./D.C. AND WHERE PROHIBITED BY LAW.
The Farm Rich Win Your Party Instant Win and Sweepstakes (“Promotion”) is sponsored
by Rich Products Corporation (“Sponsor”), One Robert Rich Way, Buffalo, NY 14213, and is
administered by Prize Logic, LLC, (“Administrator”), 25200 Telegraph Road, Suite 405, Southfield,
MI 48033.

2. ELIGIBILITY: This Promotion is offered only to legal residents of the fifty (50) United States
and D.C. who are at least eighteen (18) years old at the time of entry (at least nineteen (19)
years old if a resident of Alabama or Nebraska). Employees, officers and directors of Sponsor
and its share-holders, Administrator, and any of their respective owners, parent companies,
affiliates, directors, subsidiaries, franchisees, representatives, advertising, promotion and
production agencies, agents (collectively, the “Promotion Entities”) and their immediate family
members (defined as spouse, parent, child, sibling, grandparent, grandchild and the “steps”
of each) and persons living in the same household of each (whether related or not) are not
eligible to participate in the Promotion. This Promotion is subject to all applicable federal, state
and local laws and regulations.
Participation constitutes entrant’s full and unconditional agreement to these Official Rules and
Sponsor and Administrator’s decisions, which are final and binding in all matters related to the
Promotion. Winning a prize is contingent upon fulfilling all requirements set forth herein.
Entrants and/or potential winners may be required to provide proof of identification and
eligibility as required by Sponsor or Administrator. For purposes of the Promotion, an entrant’s
residential address and e-mail address will be the physical address and e-mail address,
respectively, submitted at the time of entry. Entrants will not be allowed to change their
physical address or e-mail address after registering for the Promotion. In the event that
different members of a single household enter the Promotion during the Promotion Period
using, collectively, more than five (5) unique e-mail addresses, all of the Game Plays/entries
associated with that household (as determined by Sponsor or Administrator in their sole
discretion) may be disqualified. If it is discovered or suspected that an entrant has registered
or received Game Plays/entries or attempted to register or receive Game Plays/entries for the
Promotion using multiple e-mail addresses or multiple identities for the purpose of entering
the Promotion in excess of the entry limits stated herein, all of that entrant’s entries will be
declared null and void and any prize that entrant might have been entitled to win will not be awarded and may be revoked (if already awarded at the time the impermissible activity is
discovered). Use of any automated system or any like methods to participate in the Promotion
is prohibited and will result in disqualification of any entrant attempting such use.

3. HOW TO PARTICIPATE: During the Promotion Period, an eligible entrant must visit
www.winyourparty.com (“Website”) and enter his/her email address. Entrant will then follow
the on-screen instructions to register for the Promotion by providing all information requested
on the registration form, including, but not limited to, complete first and last name (no initials),
complete mailing address (no P.O. Boxes), city, state, ZIP, telephone number, date of birth,
and agreement to the Official Rules. After registering, entrant will be able to enter a code
(“Code”) on the Website to receive Game Plays/entries. There are two (2) ways to receive
Codes:
A. Purchase A Product: During the Promotion Period, eligible entrants may purchase
any Farm Rich appetizer from a participating Walmart location (“Qualifying Purchase”)
to obtain a Code from the package, while supplies last.
B. Free Method – How to Obtain a Code without a Purchase: Eligible entrants may
receive a Code without making a purchase by using one of the following methods:
i. Mail-in Code Request: To obtain a Code without making a purchase from
December 21, 2016 through February 1, 2017, an entrant must legibly hand
write his/her complete first and last name (no initials), complete street
address (no P.O. Box), age, and valid e-mail address on a 3½” x 5” properly
stamped postcard and mail it to: Farm Rich Win Your Party Code Request,
P.O. Box 251328, West Bloomfield, MI 48325. Requests sent in an
envelope will not be accepted. Mail-in requests must be postmarked by
February 1, 2017 and received by February 10, 2017. Administrator will
send three (3) Codes by e-mail to the e-mail address provided on the
request (which must match the email address used to register for the
Promotion). Limit one (1) mail-in request per person/household per
day. Multiple mail-in requests with the same postmark date will collectively
be deemed one (1) request. Mail-in requests will not be returned and no
further correspondence will be entered into. Mail-in requests must be
original and hand-written. No mechanical reproductions are allowed.
ii. Online Code Request: Between 12:00 PM (noon) ET on February 1,
2017 and 11:59:59 PM ET on February 17, 2017, an entrant may use the
following code WINYOURPARTY.
Once a Code is obtained, the entrant must visit the Website and enter the Code. The entrant
will automatically receive one (1) entry into the Sweepstakes, per Code, and then must follow
the on-screen instructions to play the Instant Win Game (“Game Play”). An eligible entrant
will be able to enter up to three (3) Codes each day. After an entrant enters one (1) Code,
he/she will be eligible for “Prize Pool 1”, after an entrant enters two (2) Codes, he/she will be
eligible for “Prize Pool 2”, and after an entrant enters three (3) Codes, he/she will be eligible
for “Prize Pool 3”. After submitting 3 Codes, entrants will always be playing for a chance to
win a Prize Pool 3 Prize. After the Game Play, the entrant will receive notification on the
Website screen as to whether he/she is a potential “Instant Winner” (“Notification”). Each entrant who receives a winning Notification will be deemed a potential Instant Winner subject
to verification of the entrant’s eligibility and compliance with these Official Rules, as
determined by Sponsor and Administrator in their sole discretion. An entrant is not a winner
of any prize, even if the Notification should so indicate, unless and until entrant’s eligibility and
the potential winning Game Play have been verified and entrant has been notified that
verification is complete. Sponsor will not accept screen shots or other evidence of winning in
lieu of its validation process. Any Game Play that occurs after the system has failed for any
reason is deemed a defective play, is void, and will not be honored.
Limit: Regardless of the method used to obtain a Code, an entrant may enter three (3) Codes
to receive three (3) Game Plays and three (3) Sweepstakes entries per day during the
Promotion Period. A “day” is defined as starting at 12:00 AM ET and ending at 11:59:59 PM
ET on each calendar day during the Promotion Period, except on January 9, 2017 when the
day will start at 12:00 PM ET.

4. RANDOM DRAWING: On or about February 20, 2017, Administrator will randomly select
one (1) potential Sweepstakes winner (“Grand Prize Winner”) from among all eligible entries
received during the Promotion Period. The Grand Prize Winner is deemed to be a potential
Grand Prize Winner, pending verification of eligibility and compliance with these Official Rules,
as determined by Sponsor and Administrator, in their sole and absolute discretion.

9. PRIVACY POLICY: Any personally identifiable information collected during an entrant’s
participation in the Promotion will be collected by Sponsor, Administrator or their respective
designees and used by Sponsor, Administrator, their respective affiliates, designees, agents
and marketers for purposes of the proper administration and fulfillment of the Promotion as
described in these Official Rules and also as otherwise set forth in Sponsor’s Privacy Policy
stated at https://farmrich.com/policies.
10. PUBLICITY RIGHTS: By participating in the Promotion and/or accepting a prize, each entrant
agrees to allow Sponsor and/or Sponsor’s designee the perpetual right to use his or her name,
biographical information, photos and/or likeness, and statements for promotion, trade,
commercial, advertising and publicity purposes, at any time or times, in all media now known
or hereafter discovered including live television, worldwide, including but not limited to on the
World Wide Web, without notice, review or approval and without additional compensation
except where prohibited by law.
11. GENERAL: In the event of a dispute as to the identity of a winner, the winning Game
Play/Sweepstakes entry will be declared made by the authorized account holder of the e-mail
address submitted on the registration form associated with such Game Play/Sweepstakes
entry. “Authorized account holder” is defined as the natural person who is assigned to an email
address by an Internet access provider, online service provider or other organization
(e.g., business, educational institution) that is responsible for assigning e-mail addresses for
the domain associated with the submitted e-mail address. Sponsor and Administrator reserve
the right to disqualify any individual found, in their sole opinion, to be tampering with the
operation of the Promotion, to be acting in violation of these Official Rules or to be acting in
an unsportsmanlike manner or with the intent to disrupt the normal operation of a Promotion.
CAUTION AND WARNING: ANY ATTEMPT TO DELIBERATELY DAMAGE ANY WEBSITE
OR TO UNDERMINE THE LEGITIMATE OPERATION OF THIS PROMOTION MAY BE A
VIOLATION OF CRIMINAL AND CIVIL LAWS. SHOULD SUCH AN ATTEMPT BE MADE,
THE SPONSOR RESERVES THE RIGHT TO SEEK DAMAGES OR OTHER REMEDIES
FROM ANY SUCH PERSON(S) RESPONSIBLE FOR THE ATTEMPT TO THE FULLEST
EXTENT PERMITTED BY LAW. If any provision of these Official Rules or any word, phrase,
clause, sentence, or other portion thereof should be held unenforceable or invalid for any
reason, then that provision or portion thereof shall be modified or deleted in such manner as
to render the remaining provisions of these Official Rules valid and enforceable. The invalidity
or unenforceability of any provision of these Official Rules or the prize documents will not
affect the validity or enforceability of any other provision. Sponsor’s failure to enforce any term
of these Official Rules shall not constitute a waiver of that provision and such provision shall
remain in full force and effect. All Game Plays/Sweepstakes entries and/or materials
submitted become the property of Sponsor and will not be returned. In the event of any conflict
with any Promotion details contained in these Official Rules and Promotion details contained
in any promotional materials (including but not limited to point of sale, television and print
advertising, promotional packaging and other promotional media), the details of the Promotion
as set forth in these Official Rules shall prevail.
12. WINNERS LIST: To obtain a list of winners, mail a self-addressed, stamped business-sized
envelope to: Farm Rich Win Your Party Instant Win and Sweepstakes – Winners List Request,
8
P.O. Box 251328, West Bloomfield, MI 48325. Winners List requests must be received by
April 18, 2017.
Farm Rich is a registered trademark and Real-Life Good is a trademark of Rich Products
Corporation. © 2017 Rich Products Corporation. All rights reserved.
MetaBank® is not the sponsor of the sweepstakes. Card may have fees that reduce winnings.
Funds do not expire.

Hard Rock Cafe – Win a grand prize of a trip for 2 to Hollywood for a Live Like JLO Experience valued at up to $100,000 OR 1 of 165 minor prizes
Expired
Comment
Top