View All Sweepstakes
Winners List Official Rules
Open to residents of the U.S. 21+

The “Natty Gear Instant-Win Game” is open to residents of the United States, who are
21 years of age or older. Void where prohibited.

To participate in this Game, you must first obtain a code as described
herein. Look inside specially-marked packages of Natural Light beer for a code (“Code”). Or, to request
a Code without making a purchase and a copy of the Official Rules, hand print your name, address,
email address, and age on a 3” x 5” card or piece of paper and mail to: Natty Gear Instant-Win Game
Code Request, Dept. 688-70016, PO Box 75144, El Paso, TX 88575-7144. Your Code will be emailed
to you. Free Code requests must be received by July 27, 2015. Limit one (1) free Code request per
envelope. Limit one (1) free Code request per person per Day. A “Day” is defined as a twenty-four (24)
hour time period beginning at 12:00:00 a.m. CDT and ending the same day at 11:59:59 p.m. CDT.
4. HOW TO PLAY
Visit www.NaturalLight.com (“Website”), look for the Game mention, and follow the
online instructions to enter your Code, register, and submit a play (a “Play”) for a chance to win a prize. During the Game Period, randomly-selected times will be chosen by the independent judging organization (“Judges”), whose decisions are final in all matters relating to this Game. The first participant who completes a Play in accordance with these Official Rules on or immediately after a randomly-selected time during each will win a prize. If your mobile phone, tablet or computer screen displays a prize-winning message, you are a winner of a prize. If your mobile phone, tablet or computer screen does not display a prize-winning message, you are not a winner of a prize. See Rule #12 for Prize details. All Plays must be received and/or recorded during the Game Period. No other form of Play is valid. Limit one (1) Play per Code. Limit one (1) Play per person per Day.
Anheuser-Busch, LLC (“Sponsor”), its affiliates, and subsidiaries are not responsible for illegible,
lost, late, damaged, incomplete, misdirected, unintelligible, returned or undelivered Plays, telephone
calls or emails or for lost, interrupted or unavailable satellite, network, server, Internet Service Provider
(ISP), Website, or other connections availability, accessibility or traffic congestion, miscommunications,
failed computer, network, telephone, satellite or cable hardware or software or lines, or technical failure,
or jumbled, scrambled, delayed or misdirected transmissions, computer hardware or software
malfunctions, failures or difficulties, or other errors of any kind whether human, mechanical, electronic
or network. Persons who tamper with or abuse any aspect of this Game or Website, or act in violation
of the Official Rules, or act in any manner to threaten or abuse or harass any person, or violate the
Website’s terms of service, as solely determined by the Sponsor, will be disqualified. Neither the
Sponsor nor any of their respective agencies are responsible for any incorrect or inaccurate information
whether caused by Website users, tampering, hacking, or by any of the programming or equipment
associated with or used in this Game, and assumes no responsibility for any errors, omission, deletion,
interruption or delay in operation or transmission or communication line failure, theft or destruction or
unauthorized Website access. Any use of robotic, macro, automatic, programmed or like methods of
playing will void all such Plays, and may subject that participant to disqualification. Neither the Sponsor
nor its agencies are responsible for injury or damage to participant’s or any other person’s computer or
property related to or resulting from participating in this Game. Should any portion of Game be, in the
Sponsor’s sole opinion, compromised by virus, worms, bugs, unauthorized human intervention or other
causes which, in the sole opinion of the Sponsor, corrupt or impair administration, security, fairness or
proper play of this Game, or submission of Plays, Sponsor reserves the right, at its sole discretion, to
suspend, modify or terminate the Game, and randomly select the winners from valid Plays received
prior to action taken, or otherwise as may be deemed fair and equitable by the Sponsor. In the event of a dispute regarding the identity of a participant, the authorized subscriber of the email account used to play will be deemed to be the participant, and must comply with these rules. The authorized account subscriber is the natural person who is assigned the email address by the ISP or other organization responsible for assigning email addresses. All materials submitted become the property of AnheuserBusch, LLC and will not be returned.

Codes are void if not obtained through authorized, legitimate channels, or if any part is defective, altered, duplicated, photocopied, forged, counterfeited, mutilated or tampered with in any way, or if Game materials contain or are the result of a printing, seeding, typographical, mechanical or other error(s), or do not contain proper security devices (an “irregular Code”). Any attempt by a participant to (a) Play the Game using irregular Codes, (b) generate fraudulent Codes and/or (c) use multiple names, email addresses, phone numbers and/or any other fraudulent mechanisms, as determined by Sponsor in its sole discretion, shall give Sponsor the right to disqualify participant in its reasonable discretion. Sole liability for an irregular Code is limited to replacement with a free randomly selected Code, while supplies last. Only the number of prizes stated in the Official Rules will be awarded. In the event that a programming, production, seeding, technical or any other reason(s) cause more than stated number of prizes to be claimed, Sponsor reserves the right to award only the stated number of prizes (previously not awarded) by random drawing from among all legitimate eligible prize claimants. Screen shots are not proof of winning status.
All prizes will be awarded throughout the Game Period. All prize claims are subject to verification before any prize will be awarded. Odds of winning a prize depend upon the number of Plays received and the order in which they are received. Limit one (1) prize per person.
5. NOTIFICATION
Prize winners will be notified at the time of playing and will receive a prize-winning message
with instructions on how to claim prize. The prize must be claimed as stated within the notification
message within seventy-two (72) hours or prize will be forfeited. Unclaimed prizes will not be awarded.
Sponsor is not responsible for suspended or discontinued Internet, landline or wireless service which
may result in a potential winner not receiving initial prize notification. Winners may be required to
complete, sign and return an affidavit of eligibility and liability and publicity release within seven (7)
days of completing the steps within the notification message. In the event of noncompliance within any
of these time periods, prize will be forfeited. Any prize notification or prize returned to the Sponsor or its
agencies as undeliverable will result in disqualification. Prize will be mailed within 6-8 weeks of winner
verification.

Acceptance of prize offered constitutes permission for Sponsor to use winner’s name, voice, biographical information and/or likeness for purposes of advertising and promotion without further compensation in all media now known or hereafter discovered worldwide and on the Internet without notice or review or approval as permitted by law.

Amazon.com and New Balance – Win a 10,681 trip for 4 to attend one of the following 2016 Walt Disney World or Disneyland Resort Marathon Weekends in either Lake Buena Vista, FL or Anaheim, CA by December 26, 2015
Expired
Comment
Comment 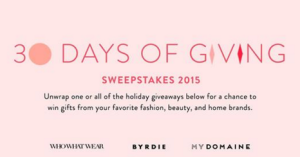 Cirque Du Soleil –Watch and Win a trip for two people to Las Vegas, Nevada and tickets to see The Beatles Love by Cirque Du Soleil valued at $4,150 by December 20, 2015
Expired
Comment
Top